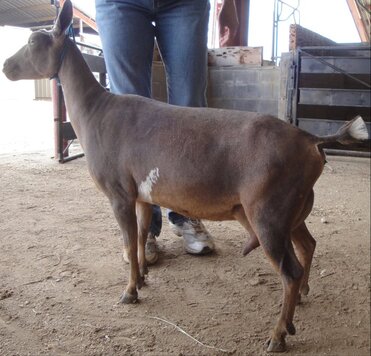 Miz Bell has proven to be a highly productive doe, producing five kids during her last kidding and producing enough milk to feed all and still put some in the pail. One of the bucklings from that kidding, Owlhaven DR Ocotillo *B did extremely well in linear appraisal, earning VVE 87 as a yearling and being singled out as one of the appraiser's two favorite bucks. Cora's granddaughter, Owlhaven MH Buddleia is showing exceptional promise in the show ring, going  Reserve Grand Junior Doe in her first show.

Eighth place yearling milkers, 2019 ADGA National Championship Show
"C" line
Here's what the Carters say about her:
BEWITCHED is a doe who shows a lot of dairy strength as a two year-old with a nice wedge shape to her rear barrel, openness and spring of ribbing, and her will to milk. She has a pretty rear udder with a nice arch in the rear, strength of medial, and correct teat size and placement. Bewitched kidded with quints in 2020 and did an outstanding job getting herself back into the swing of things.